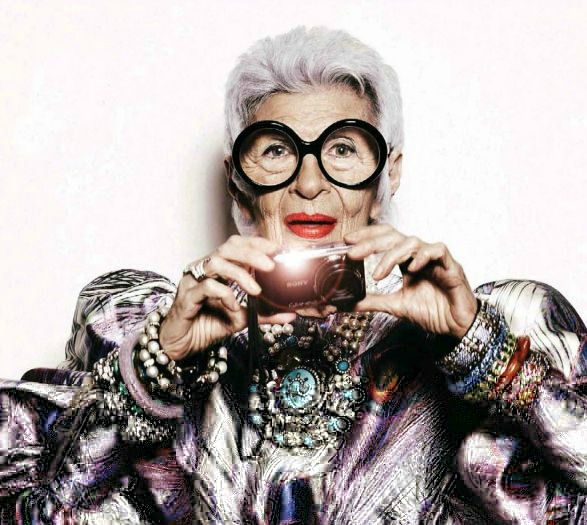 There are some women who were born to make an impact and Iris Apfel is one of them – I like to call it the Apfel Effect. She has long been an icon of mine, it is her flair for both life and fashion and also her gritty determination that I find so inspiring and the reason why I have followed her career and life for so long. She makes sense to me. There are few women that in theirs 90’s have launched a very successful makeup collection with MAC, start a program and become a professor with the University of Texas at Austin, start a collection of glasses, has in 2015 modeled with Kate Spade and then appear on the Home shopping channel to name but some of her projects in the last few years. She is who I aspire to be when I grow up.

In case you are not aware who the inspirational business woman and fashionista is I’ll give you a short run down of her amazing life. Iris Apfel was born in 1921 in Queens, New York into an entrepreneurial family and she studied art history in New York University and the University of Wisconsin. She then went onto work for interior designer Elinor Johnson and also to work for Women’s Wear Daily among other jobs. It was then in 1947 that she met the man that was to be the love of her life Carl Apfel to whom she married the following year.

In the 1950’s she and Carl launched the textile company Old World Weavers, this was a small but prestigious company that allowed them to travel all over the world from Turkey to Lebanon and beyond. “I’ve always been a fabrics freak and from the Fifties, we’d go once or twice a year to Europe and fill a container or two” {via}  Iris has said; “Carl and I, from the time we married, we did everything together,” …. “We worked together, we traveled together, we lived together — until just recently, I never went anywhere without him.” The company was well known around in the world and operated until 1992 where is was acquired by Stark Carpet.

They also decorated the White House over many administrations (she has worked with 9 of the Presidents wives!!) and apparently Jackie Kennedy was not the easiest to work with – I have to say when Carl let this slip in the Iris documentary I was in stitches!

It was actually in 2005 that I first became aware of who Iris was when an exhibition was held in the Metropolitan Museum of Art’s Costume Institute, the exhibit was called Rara Avis: Selections from the Iris Barrel Apfel Collection and this is where she also gained the nickname of the Rare Bird.

She is renowned for collection of costume jewellary and many of it was exhibited at the institute, 60 pieces I believe. It was at that time that I read an article on her (I can’t even remember the source 10 years on) but she stuck a personal cord with me and she has been one of my icons ever since. Interestingly to note and which may not come as a surprise, her icons include Millicent Rogers and Pauline de Rothschild.

Iris’s signature style is just amazing. I am someone who loves to play with fashion and not take it seriously to the point of boredom and I feel like I found my spirit sister in Iris. Her signature round glasses to her bold accessories to her fun way of dressing is just so enticing to me. And did you know that she was one of the first women in the forties to wear jeans? She is a trend setter even if she doesn’t believe so.

She just inspires me and reminds me that it is okay to like super funky accessories and to care a little less about what those around me think. Sometimes I feel that the world has become so normcore that it is looked upon as weird to try and be an individual. But Iris shows that it is okay and inspires so many people to work hard, have fun and most of all don’t take everything so seriously.

“I absolutely consider fashion a form of art. Of course, a lot of people put effort into looking awful. But there are also people making bad art. It’s not what you do, it’s the way that you do it” {via}

I love these snippets from a Marie Claire interview with Iris from earlier this year;

“There’s no formula. I had to be my own person and live my own life if I wanted to be happy, and I just did it. I mean, you need a certain amount of strength and courage of your own convictions, but what else can I tell you? There’s no magic formula. People can do it, and some people can’t”

“I don’t want to attach any legacy—that’s for other people to do. I’m not out to preach. I just live my own life. I’m very happy if I can help somebody—that’s wonderful. But it’s up to them what they want to think about it or what they want to take away; it’s their business, not mine. Tell me something: Why do people want roadmaps to everything? Can’t anybody figure something out by himself?”

Although an older woman at this stage – she has the wit of a woman in her twenties (if they’re lucky!) and I just love her outlook and excitement on life. You can see in the film that she just keeps going and never stops. She did an amazing interview with Into The Gloss a few years ago and she certainly has it right when it comes to lifestyle and it is no wonder that she is the age she is and is still up and so able;

“I’m very active and I don’t sit still very much. I like to eat well, I don’t like rich food, and I don’t eat junk food. I used to like to drink, not heavily of course—now I just drink wine at dinner. I like good, wholesome, well-prepared food. I don’t like glopped-up, I don’t eat cakes. Sometimes they say I don’t eat enough, but it’s better to eat less than more. I think more people get sick from over-eating all the wrong things. The body is like a machine—if you don’t put the right kind of fluids into it, it’s not going to work so well, or it’s going to get clogged up”. {via}

In 2014, Albert Maysles premiered his documentary about Iris Apfel and I think that is where the next generation is learning about her. The documentary was just brilliant and Albert really caught Iris’s essence on film. What is interesting is that I have heard that Iris had no interest in making a film until she met Albert and their chemistry gives the film a warmth that is rarely seen in documentaries. But I am so glad that she did – it gives such an amazing insight into her clothes, lifestyle, interior design influences and just her energy for life.

If you haven’t seen it then I would highly recommend that you do – it’s on Netflix at the moment though I actually went to the a screening when it was released in The Light House Cinema earlier this year as I could not wait for the DVD/general release (I even took a day off work just to go to Dublin to see it!) and it was certainly worth the trip.

I didn’t want this post just to be a movie review with a  quotes put in as that has been done a LOT since the movie’s release and scored 97% on Rotten Tomatoes which also shows how much people loved this film. I want to give you a glimpse into her life and try and show you why she is one of my icons which I hope I have succeeded with.

This year we sadly saw the passing of her love Carl Apfel in August. If you have watched the documentary then you will know that their love was always there and surrounded them and they were one and the same. Their love to me was the core of the film. He was a style icon in his own right and wow did I love his patterned golf pants! Sadly also in March this year, Albert Maysles the amazing documentarian who directed Iris (among many other astounding films) passed away aged 88 – he had such a way of capturing life and as he said to an interview in 1994 with the New York Times; “Making a film isn’t finding the answer to a question; it’s trying to capture life as it is” and I think he did just that with Iris.

YOU MAY ALSO LIKEMORE FROM AUTHOR

Here’s what’s coming to Netflix in May

This site uses Akismet to reduce spam. Learn how your comment data is processed.

Here’s what’s coming to Netflix in May

By continuing to use the site, you agree to the use of cookies. more information

The cookie settings on this website are set to "allow cookies" to give you the best browsing experience possible. Information about your use of this site is shared with Google. By using this site, you agree to its use of cookies. If you continue to use this website without changing your cookie settings or you click "Accept" below then you are consenting to this.